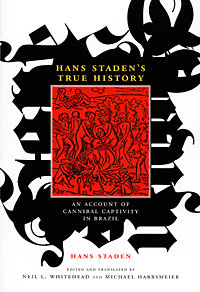 Do they still eat humans? " They " being other humans?
Ugh. Um, yes.

This article in the English newspaper The Telegraph  is about cannibalism in 2012,
not 1550,  the time frame of Hans Staden's True History: An Account of Cannibal Captivity in Brazil, edited and translated by Neil Whitehead and Michael Harbsmeier.  He lived to tell the tale.


In April 2012, the Huffington Post reported, the unfortunate three met the killers when they applied for a nanny position in the household of  those charged by Brazilian authorities with murder and cannibalism.  According to a CBS News report, there were other victims.  CNN also covered the story.
Posted by Open Grave at 10:10 AM